“Jesus began to preach, Repent, for the kingdom of heaven has come near.” – Matthew 4:17

One of Jesus’ most powerful invitations is for us to repent. It is in fact more than an invitation, and is also a command. It is proclaimed in his capacity as a conquering king. In ancient times, when a kingdom was about to fall at the hands of a superior or greater one, the king of the conquering kingdom would typically send messages to the subjects of the falling kingdom to urge them to surrender, to switch their allegiance to the new king, to lay down their arms and denounce their hostility to him.

This is what Jesus does. His call for us to repent is militant. He made a world to be ruled by him as king, but then significant portions of that realm and territory were lost to a cruel and hateful adversary, who has left the realm in ruins and turned its subjects against the God who created them. And for centuries, God worked tirelessly to lay the ground work for reclaiming the lost territory. God conducted reconnaissance work behind enemy lines, building alliances inside the enemy’s own territory until a king would arrive to lead his people out of that territory and make them a part of the army he has built over time to take the dark empire down. So with the coming of Jesus, the King of Heaven, the kingdom of heaven is near, and the downfall of the kingdom of hell is imminent. And so Jesus has sent the message out to all those who are still part of that dark kingdom that they are on the wrong side of the war, and that before the whole thing collapses under the might of his conquest and leaves them in permanent ruin, they are mercifully being given a chance to lay down their weapons against God, to acknowledge and renounce their rebellion against God’s rightful claim to kingship over them, to renounce their allegiance to their usurping kings, and to pledge faithfulness and obedience to him going forward.

In a word, to repent is to change in response to a new reality. There is a new king in town, and we are called upon to respond by committing to change our attitudes, our actions, and the principles by which we do both. And because the new kingdom is unlike anything we have been a part of, being a part of it means that we will have to keep changing as we become aware of new ways of living that are not life as we know it. Repentance is both an event that happens the moment we lay down our arms and pledge our allegiance to Jesus, as well as a process that happens as we go forward with adjusting our lives to fit or align with the new regime. Repentance is surrendering to Jesus now, always. 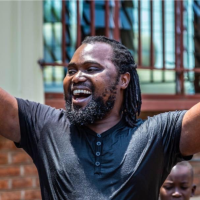